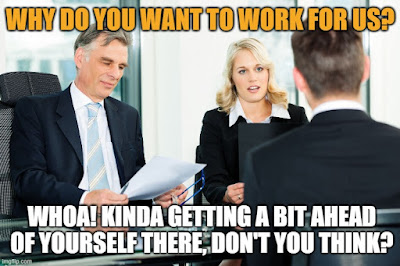 It's late March, 2018. I’m interviewing for a job at a private ESL college in the Melbourne CBD. To get here I’ve taken a 3-hour bus trip and trekked some 30 minutes through busy streets. Great city, a nice place to visit, but there’s a lot of traffic and way too much going on. It's fair to say that I'm not a fan of the Big Smoke.

I’m about 20 minutes early for my interview, but it’s fine. I’m happy relaxing in the waiting area with my e-reader. My new leather shoes have been torturing my feet, especially that long ligament thingy which connects the shin to the upper foot. That bit really hurts. I haven’t worn trousers or a tie in ages, either, and I’m not exactly relishing the experience. On top of all this, the couch in the waiting area isn’t very comfortable. I’m trying to extract my underpants from my arse without the receptionist noticing.

Eventually, INTERVIEWER emerges from the bowels of the college to greet me. He’s the big boss, the CEO. It’s my time to shine!

INTERVIEWER: (Shaking hands with me) Hi. Tim, is it?

I go into the guy’s office. Not only has he gotten my name wrong, I see that he also has the wrong CV on his desk. Funnily enough it belongs to someone called Tim...

INTERVIEWER: (Sitting) So, I see you have experience with [Company Name]?

ME: (Also sitting) No, I’ve never worked for them.

INTERVIEWER: No? You are Tim, aren’t you?

INTERVIEWER: (Looking confused, but also a bit annoyed) Oh, you’re not? Then why did you say you were Tim?

INTERVIEWER: So, what was your name again?

INTERVIEWER: (Finding my CV directly under Tim’s and flicking through it) Okay. Okay! Oh, so you’re Jim! Actually I didn’t think you were coming today. Because you never replied to my email.

ME: Uh, no I definitely did reply. We confirmed the date, time and everything for this interview.

ME, THINKING: I've got the email to prove it! Also, if you weren't expecting me, why is my CV right there on your desk? Or do you think I'd fucking come here for shits and giggles? I travelled some 4 hours for this and I have to do the same just to get home again!

He goes on to talk about how I've completed a few single-year teaching contracts. He asks me why. I tell him that it's common for ESL teachers to do a year here and there in different countries. People who set out to see the world don't tend to stay in one place for long. He argues that it isn't the norm. It is, though, and he's talking out of his arse. Eventually...

INTERVIEWER: So, I see you’re currently doing your TAE certificate?

ME: Yes, that’s right. I started a few weeks ago.

INTERVIEWER: A few weeks ago? And you haven’t finished yet?

ME: No, it’ll take me another six months.

INTERVIEWER: What? But you can do that course in a couple of weeks.

To my surprise, we go back and forth on this for a bit. He’s talking out of his arse again. I know for a fact that it’s not possible to complete the certificate in question in a couple of weeks. Maybe it was 20 years ago, but things have changed. When he starts getting argumentative, I let it drop. I don't need a TAE for this particular job anyway - I’m already more than qualified. He asks a few other questions about me and about my work history. Eventually…

INTERVIEWER: So, are you aware of how English teaching has changed?

ME: No. How has it changed?

INTERVIEWER: (After a long pause) It has changed.

ME: (After an equally long pause) Uh, okay…

I'm grinning a bit because of these really dumb exchanges. The guy seems genuinely puzzled by my amusement. When he asks if I have any questions for him, I say no and there's another long moment of silence. The only question I have is too rude to ask: why the fuck would I want to work for an incompetent, gaslighting, combative prick? But he just looks confused, probably trying to figure out why I'm not very enthusiastic about the job. Does he think that as my potential employer, he holds all the cards?

A job interview is not a gift. It's not an act of charity. It's not the granting of a boon by a feudal lord to a dirty peasant. It's a chance for a boss and a worker to see if they're right for each other, and nothing more. And in this particular case, we are clearly not a good match.

Anyway, the dude finally wraps up the interview by saying he’ll be in touch. For me it's the cherry on top because he says it so unconvincingly it's a wonder his pants don't burst into flames. I'm not mad, though - I don't care if I never hear from him again.

I found a job elsewhere a couple of weeks later.

A survival technique inspired by crap films I was overseas and living alone when A.I. Artificial Intelligence (2001) popped up on TV one ni...